The Arthur Boyd ‘Brides’ exhibition has been showing at the Heide Museum of Modern Art since November. I’m a huge Boyd fan so decided to check it out before it closes in a few weeks. Boyd is a well-known and very talented Australian artist and created the Brides series – more than 40 paintings in all – between 1957 and 1960 after travelling to Central Australia. They tell the story of an Aboriginal man and his mixed-race bride and the cultural and personal trials they encounter.

After they were exhibited in Australia and London in the early 1960s, the paintings were snapped up by art collectors and galleries all over the world. In recent years many have found their way back to Australia providing the Heide gallery an opportunity to bring together most of the paintings for this exhibition.

While at the gallery I stumbled across another exhibition which was both delightful and intriguing.  The story behind it goes something like this. In 1944 Albert Tucker (another famous Australian artist) found two paintings in a bicycle shop in Melbourne. He was drawn to the naivity of the paintings and set out to find the artist. He discovered they belonged to a travelling performer named Professor Alfred Henry Tipper who was the subject of the two paintings. Unfortunately Tipper had died in April that year.

Tucker eventually located Tipper’s last place of residence where he found another three paintings – two were signed ‘H.D’.  He wrote an article about the paintings which was published in the literary magazine ‘Angry Penguins’ – edited by his friend and benefactor John Reed. Tucker lauded the fresh and ‘untutored’ talent of H.D and the article led to an exhibition of four of the paintings by the Contemporary Art Society which in turn led to the local art critic, Clive Turnbull, revealing that the artist was H. Dearing. This announcement was supported by the discovery of a signed sixth painting. No other details of H. Dearing were uncovered at the time but he was thought to be an amateur artist from the 1920s and 30s.

In 2007 the Heide gallery was informed of the existence of a collection of 26 drawings and paintings – many on lined notepaper – signed by H. Dearing that had been with the same family for over 70 years. The collection had been given to the family by an itinerant worker and amateur artist in exchange for food and board. The works had been kept in a folder and were in excellent condition. The collection was purchased by the gallery and included in the exhibition. 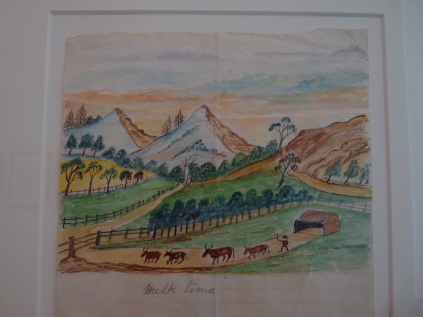 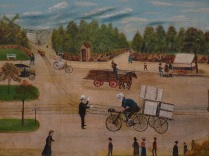 One of the original H.D paintings discovered by Tucker. 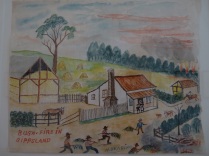 Little else is known about H. Dearing. While there seems little doubt that he existed and painted most of the works in the exhibition, art critics have now added another element to the mystery, speculating that, as there are stylistic differences between the original two paintings and the three found at Tipper’s home, the H.D ‘discovery’ may have been a hoax (see http://www.heide.com.au/assets/files/Exhibitions/TuckerH.D.ListofWorks.pdf).

Regardless, it is an enchanting story and the paintings and drawings are well worth seeing.